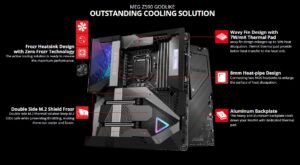 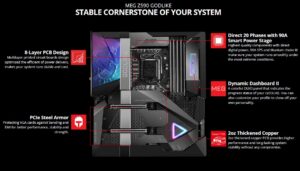 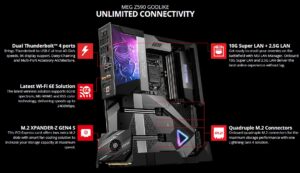 FULLY CONTROLLABLE IN BIOS AND SOFTWARE

MSI motherboards let you manage speeds and temperatures for all your system and CPU fans. Total Fan Control allows you check your primary system characteristics in a simplified graphical interface. You can also set up to 4 temperature targets for CPU and motherboard, which will adjust the fan speeds automatically.

DIY 2.0 – INTEGRATING WITH THE SYSTEM ENVIRONMENT

Connect and synchronize with MSI coolers and cases with strategically positioned pin-header locations including a dedicated pump-fan header.

There are no reviews yet.

There are no questions yet

Your question will be answered by a store representative or other customers.

Thank you for the question!

Your question has been received and will be answered soon. Please do not submit the same question again.

An error occurred when saving your question. Please report it to the website administrator. Additional information:

Thank you for the answer!

Your answer has been received and will be published soon. Please do not submit the same answer again.

An error occurred when saving your question. Please report it to the website administrator. Additional information:

There are no inquiries yet.